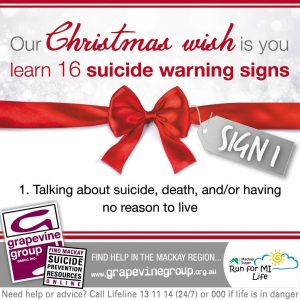 It might be beginning to look a lot like Christmas, but to many people in our community that can come with a whole world of hurt.

“A lot of people do it tough at this time of year,” Campaign coordinator Debbie Knight said.

“Christmas is known as being one of those times where we see the incidence of mental health issues – and subsequent risk of suicide – increase sharply.

“That is why, for the past few years, we have partnered with Run For MI Life to take this campaign to the broader community.”

Ms Knight said the campaign, which would be shared via social media and local media partners, had one simple message.

“All we really want this Christmas, is for our community to be suicide alert.

“Know the signs, know what to look for and know who to turn to for help. Ask yourself if you would know how to respond if someone close to you was at risk.

“We have now had 4,065 people from throughout the Mackay region trained through suicide prevention training, including ASIST and SAFEtalk. That’s 4,065 people who are now better equipped to identify and assist someone who might be at risk of suicide.”

Run For MI Life founder and coordinator Jo Shanks said she was proud to partner with Grapevine Group in bringing this campaign to the Mackay community once again.

“Even though things are looking up in our community, there are still people doing it a bit tough and that’s why we think this is a campaign well worth supporting and it’s a message well worth spreading!”

He said the businesses, promoted as Help-A-Mate Hubs, had been set up with the cards in October as part of a campaign to make sure vital, life-saving information was available in the community.

“At this time of year, having that kind of local information readily available is really important,” Mr Manning said.

“Knowing the signs and being suicide alert, as well as knowing who to call or turn to, can save lives.”

For the full list of local hub locations, to see Mackay region’s list of local suicide prevention resources, or to become a SAFEtalk Ambassador, go to www.grapevinegroup.org.au 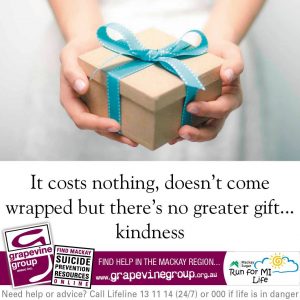