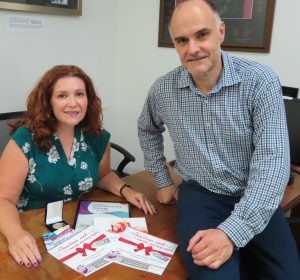 When Grapevine Group’s Debbie Knight accepted the Australia Day Award for Community Group of the Year, on behalf of the suicide prevention organisation, she had the opportunity on stage to quietly let Mayor Greg Williamson know about the results of his contribution to a major Grapevine campaign.

“It was lovely that I had the opportunity to speak to the Mayor since we shared his video (on social media for the Be Suicide Alert This Christmas campaign) and I got to tell him how successful his had been!” Ms Knight said.

“I quickly thanked him, then said: ‘I just wanted to let you know your video has had more than 10,000 views!’.

“That is huge; and it was because of Greg Williamson and the other incredible community leaders who stepped up to share their message – and make people more aware of the warning signs of suicide risk and mental illness – that the campaign reached so many people in our community and beyond.”
Ms Knight said the campaign, which was launched in November and was published widely on social and digital media from December 1 to after New Year, attracted 34 business, civic and community leaders from all sectors of the region.
She said while the campaign had been running for more than five years, this was the first year Grapevine Group had adopted such a high-profile approach.

“This is the kind of campaign every single one of us in the community can be part of and we can all feel like we are making a difference.
“Knowing the signs of suicide and being trained in a program such as safeTALK or ASIST, can make a very real difference in being able to save someone’s life.”

Grapevine Group President Laurence Manning thanked the community leaders for their support, while paying tribute to every single follower on social media who engaged with, liked or shared the posts.

“In this case, every single click makes a difference. This saves lives. This makes people more aware,” Mr Manning said.
“We know Christmas is one of – if not the- highest risk periods of the year for suicide. Deb’s commitment to this campaign, and the groundswell of support we have received has been excellent.”

Mr Manning said the success of the campaign also helped Grapevine and its members achieve a bigger-picture goal in breaking down the stigmas surrounding mental health and suicide and helped to promote their vital free suicide prevention training.
In February the group proudly expects to put the 5000th person in our region through suicide prevention training.
“We are making progress,” he said.

“Now more than ever before, people are more willing to have the conversation. We will ask our friends, family and workmates if they are okay; more of us are able to recognise the signs. But we still have a long way to go and there still remains a stigma that needs to be overcome.”

Ms Knight said some of the key outcomes from the campaign include:
– The campaign achieved a reach of 218,748 just on the Grapevine page. (Additionally, organisations including Mackay Regional Council, Resource Industry Network and local elected representatives, shared the social media support graphics on their own pages which was not included in the count).
– This compared to a 2017 reach of about 73,000
– Community leaders contributed a total of 34 heartfelt videos urging the community to be suicide alert.
– The videos were watched more than 60,000 times.
– The region’s mayors, radio announcers, and local MPs were all strong supporters.
– The Mayor’s video, alone, was watched more than 10,000 times. – Go to https://www.youtube.com/channel/UCTgWKJAp_e4uhubSU4SDI_A to see the videos.

The community can Sign up for free safeTALK training and learn more by going to www.grapevinegroup.org.au