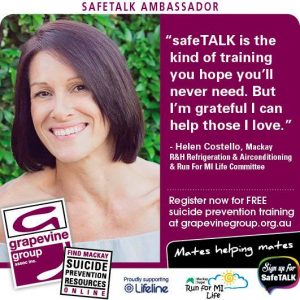 Grapevine Group has stepped up its campaign to make the Mackay region the most suicide-safe community in the country.

Coinciding with World Suicide Prevention Day, the safeTALK Ambassador initiative aims to spread the word, getting the message right to the heart of the community.

Ambassador coordinator, Debbie Knight said the program was all about making sure our community had access to information – and people to ask – about suicide prevention.

“Our safeTALK Ambassadors are people who have been through the program and know what to do if approached by someone in need,” Ms Knight said.

“These people are out in the community – they are the tuckshop volunteers, junior sport gate-keepers, coaches, music teachers, trainers, first aid officers, parents who help out at school, teachers, Scout leaders, parents and business people.

“By being an ambassador, they are not only trained in safeTALK, they have the understanding and the knowledge to point someone in the right direction – whether they need immediate support, or want to know more about training.”

Mr Manning said the more people with suicide prevention training, the more suicide-safe the region would be.

“Our safeTALK Ambassadors play a crucial role in letting people know there is something they can do in making a real difference in preventing suicide,” Mr Manning said.

“When someone dies by suicide, it affects the whole community and all too often we are left feeling completely helpless.

“Through our Ambassadors, though, we can empower the community and make a positive change.”

Grapevine Ambassador, Rowena Hardy, knows well how important the right words and the right approach is when someone needs help.

“safeTALK is a simple and straight-forward, practical course which enables people to feel confident in having this conversation,” Ms Hardy said.

“In my work, it was becoming increasingly evident that suicide was an issue my clients were dealing with, in one way or another.

“I needed to know how to help them get help.

“Of course, even when there are examples to follow in the course, there is really nothing like dealing with something like this in real life. But those examples, and the training itself, meant I have been able to have the conversation and I had the tools to help.

“This is a conversation we need to be able to have confidently. And there is such a need for suicide, as a topic, to be spoken about more openly.”

By becoming an Ambassador, safeTALK trained individuals have the opportunity to help promote suicide prevention in the Mackay region. Ambassadors receive a badge and a certificate and a social media post to let their friends and followers know they are an Ambassador and someone to whom they can turn if they need help or information.

In addition to launching the Ambassador Program, Grapevine Group and Run For MI Life will be represented at the RUOK breakfast jointly organised by the Mackay Chamber of Commerce and the Resource Industry Network.

During this event Grapevine Group representatives will present a special offer of ASIST trained employees in the workplace for those employers who enroll their workplaces for safeTALK training for 15 or more employees.

This was made possible thanks to funding from the Mackay Foundation to Run For MI Life.

The organisation is also working on a new campaign for Mental Health Awareness Week in October 2017 with Grapevine’s Help-a-mate Hubs to be established at participating partner businesses throughout the region.

These hubs will be collection points for the Grapevine Help-A-Mate cards which contains a list of local resources for anyone needing help with mental health or suicidal thoughts, in a format they can carry with them all the time in their wallet or purse. Watch this space for more information about the Help-a-mate Hubs.

These initiatives are intended to showcase the cornerstone offerings of the Grapevine Group in suicide prevention education, training and awareness through the safeTALK and ASIST training courses and much sought-after Help-A-Mate cards.