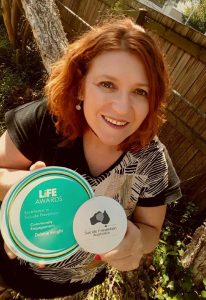 “We are so pleased to see Debbie recognised for the incredible work she has done – and continues to do – in the area of suicide prevention,” Grapevine Group President Laurence Manning said.

“For the past 13 years she has worked tirelessly to help make Grapevine Group what it is today: a strong, education and research focused organisation which plays an important role in the suicide prevention and awareness movement in the Mackay region.

“It is people like her who have helped break down the barriers; suicide is being talked about and slowly but surely we are de-stigmatising this critically important issue.

“To Debbie, we say congratulations. But most importantly, we say thank you! She is a quiet achiever, but she is effective and has made a tremendous difference.”

In receiving the award, Ms Knight thanked her long-time friend

In her acceptance speech she told of how Grapevine was named because the founding members believed people in the Mackay region were hearing of suicide along the ‘gossip grapevine’ and therefore not the life-saving resources available to them.

She said she believed social media has given great opportunity to suicide prevention and every person that likes or shared Grapevine posts has become a part of the Grapevine too.

“We have seen some effective take-up of the program in Mackay region high schools but there is still a long way to go.”

Ms Knight said this take up would be further bolstered by a research partnership between Grapevine Group and CQUniversity to help measure the effectiveness of the safeTALK program in schools.

“I’m so proud to be part of an organisation focused on real, community-based and individually-focused solutions in a space which was too long left in the shadows.

“That is why I do what I do. The award is lovely – and to have Grapevine Group recognised is just incredible. But it’s all about saving lives.”