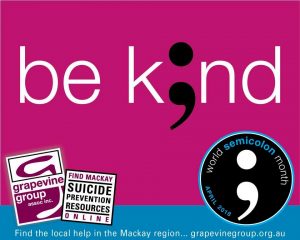 Stop for a minute. Take a moment of pause. Think about the impacts of suicide. Now, think about what YOU can do to help prevent suicide in the Mackay region.

That’s what Grapevine Group’s Debbie Knight is hoping people will do as part of World Semicolon Month.

Ms Knight, who has facilitated the campaign’s development said it was the first of its kind in Mackay region.

She said the campaign would be promoted throughout April in the hope this would become an annual part of the community calendar.

“This is about reaching out to the Mackay region community and we have partnered with schools, families, community groups and families from throughout the region to delivera life-saving message tomany people,especially theyouth and their parents,” Ms Knight said.

“First, it is directed toyoung people,15 years and over, in our community.

“Second, we appeal to parents of young peopleandencourage them toprovide support where necessary,” Ms Knight said.

“The semicolon is about people saying that they are taking a pause and it’s not the end.

“It’s a promise to continue. “My story isn’t over yet”, “Don’t let your story end”, “Cont;nue”, “Warr;or” and “Be K;ind” are phrases that have become popular in the mental health movement.

Ms Knight said as part of the campaign, Grapevine would distibute semicolon printed wristbands to at local schools and shopping centres.

She said a comprehensive social media campaign asking parents if they have “had the talk” would also feature as part of the broader campaign.

This would coincide with social media messaging aimed at parents with the headline, “Parents, have you had the talk?”.

“Thiswill encourage parents to sign up for safeTALK training sessions where they can bringtheir children,aged 15 and over, and together theywill be given the opportunity to develop skills to helpmake their families suicide-safe,” Ms Knight said.

Finally, Help-a-Mate information cards will be available from Incredible Tattoo and Barber, which will also have World Semicolon Month and safeTALK posters on display.

Grapevine President Laurence Manning said suicide wais the leading cause of death among young people and affectedAustralian families every day.

“Existing stigma is costing livesand we intend to change that,” Mr Manning said.

“Research reinforces that discussing suicide does not provoke suicidal thoughts. It’s time we talk about it and teach the younger generations thatit is no longer a taboo to discuss suicide and ask for help.”

“These cards contain our region’s vitallist of local suicide prevention services. To date, with community support, Grapevine has distributed more than 130,000 of these cardswithin the Mackay region. 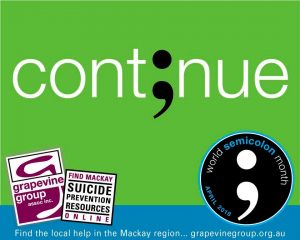 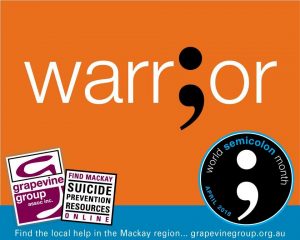 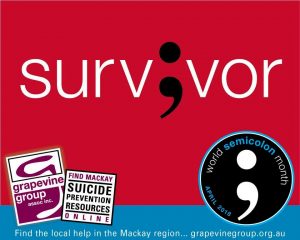