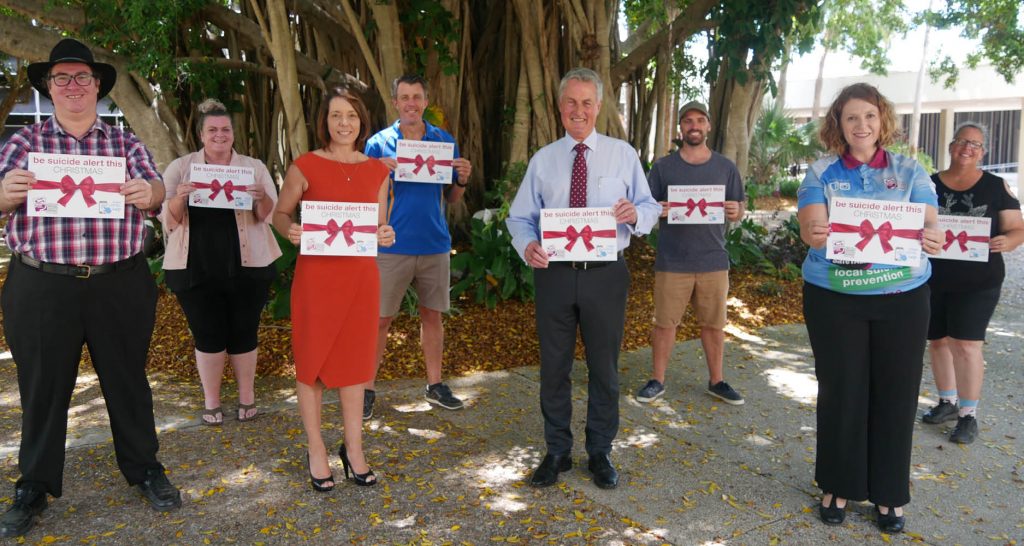 Above: Leaders from the Mackay community have lent their voices to the Be Suicide Alert this Christmas campaign.

With Christmas looming Grapevine Group, as part of their annual Christmas campaign, is asking the community to keep an eye on friends, colleagues and loved ones and encouraging smart phone users to download their new free phone app containing a vital list of local suicide prevention services.

Debbie Knight, Grapevine president, said the app is the best Christmas present she could think of.

“It’s not the season to be jolly for everyone. In fact, this time of year can make loss, or a sense of isolation more acute.

“While it can be an incredibly difficult time there are ways to make sure we know where to find information if we know someone is displaying any of the 16 warning signs of suicide.

“The phone app is full of information to point you or your loved ones to local services and support,” Ms Knight said.

The app was developed by Grapevine Group in conjunction with local IT specialists iScape.

iScape’s managing director, Stewart McKinnon, said he was proud he and his team could use technology for such a worthy cause.

“This project’s so important to iScape that we’re contributing in-kind support to the value of $25,000 and our staff have completed the excellent safeTALK suicide prevention training Grapevine provides.

“But, importantly, this app isn’t just about using technology to tap into information, it’s also about easily sharing where to find help,” Mr McKinnon said.

“We’ve designed this life-saving app for the Mackay, Isaac and Whitsunday regions so users can share it instantly via text or email.”

The app was launched as part of Grapevine’s Be Suicide Alert this Christmas campaign and this year, as with every year since the group devised the five-week campaign, Mayor Greg Williamson and a host of community leaders are helping to spread the message asking the community to stay alert to the warning signs of suicide.

“Awareness is half the battle” said Cr Williamson.

“Being alert to the 16 warning signs of suicide and having suicide prevention services at your fingertips will make helping our community easier. Christmas is a higher risk time of year. I urge our community to take the time to check in on those around them and link anyone struggling to help.”

Above: Supporters from the November 26 launch at the Jubilee Community Centre showed a united front as the group took part in the annual ‘Standing for Suicide Prevention’ photo.