Ms Weiss has worked as a guidance officer for St Patrick’s College and Catholic Education, volunteered as a Lifeline Crisis worker and contributed over 30 years to suicide prevention activities.

Ms Weiss has also devised her own toolbox presentation called Suicide Mythbusters which gives an introduction on the signs to look for, where best to find help and the skills to be able to support those experiencing suicidal thoughts.

Her extensive experience with Lifeline and in the education sector has provided her a strong background to develop this extra tool for Grapevine’s suicide prevention arsenal.

“She is so humble about the things she’s done and achieved as a volunteer that she probably wouldn’t want us to make a fuss over this special recognition.

“We should make a fuss though because she’s an inspiration with an incredible commitment that has undoubtedly saved many lives,” Ms Knight said.

This is the third time Grapevine Group has been recognised with a Suicide Prevention Australia LiFE Award. The first time was when Grapevine president Debbie Knight won the Community Engagement category in 2017 and the organisation itself was awarded the Communities Matter honours in 2020.

You can sign up for free safeTALK training or find the list local suicide prevention services by visiting www.grapevinegroup.org.au or downloading the Grapevine Group phone app. 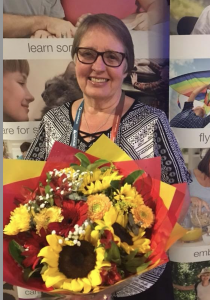